Students presenting their projects at a teachers' conference

July 27, 2018
Today, I had the privilege of co-presenting with three of my students at DigiCon 2018. The whole day was really engaging and the students benefited from hearing the keynote speech and from playing with robots. In the afternoon, we ran our own session, which a friend and colleague asked me to write about.

Our session was about designing digital tech electives that appeal to girls. I wanted to share some ideas about what has been working for us at Avila College and to show that attracting girls to digital technologies need not mean a watering down of our offerings.

The session was well attended, with about 30 teachers there. The students, previously nervous about presenting to teachers, seemed relaxed and confident once we got started. 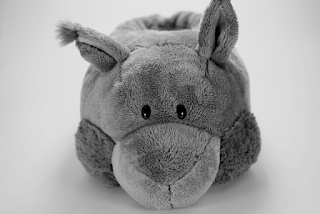 This slipper hides a message from Bob to Alice

Method One: Hiding the message in an image

After giving an overview of our curriculum, Sarah presented a project she had completed with two other students last year. This project is described in detail in this post. The basic idea is this:

Sarah demonstrated both programs using a message suggested by the audience. The applause she received was very enthusiastic.

Before demonstrating a program that implements this second method, we needed to explain the concept of public key cryptography. Emily took on this challenge. She explained that, until the 1960s, cryptographic methods suffered from the Key Distribution Problem, namely the fact that the method of encryption (the key) had to be shared by sender and recipient. This act put the key in danger of being intercepted by a third party.

Modern cryptography splits the key into two: A public key for encryption and a private key for decryption. To send a message to Alice, Bob uses her public key to encrypt it. Only Alice has the private key that can decrypt the message (I may write later about the mathematics of this decoupling of the two keys).

I was very impressed with Emily's concise and clear explanation of this difficult concept. She later showed the audience the tutorial on cryptography she had written as a class project.

It was now Erin's turn to demonstrate a program she wrote with another student to implement this encryption / decryption method. Like Sarah, Erin asked the audience to volunteer a message and demonstrated the encryption of the message and its subsequent retrieval.

Below is Erin's diagram showing the steps that her encryption program takes. The chart to the right is a worked example of the steps on the left. 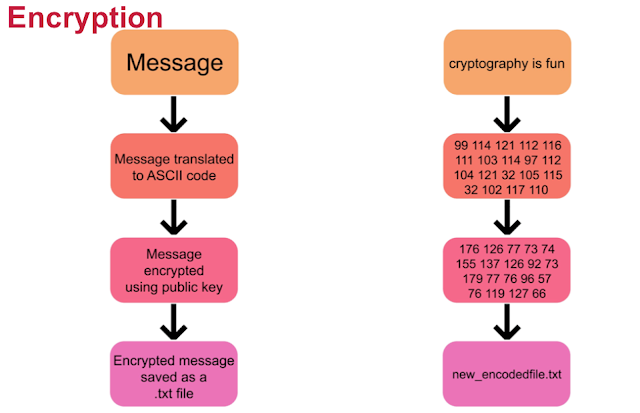 Erin's preparation was impeccable. She showed the process step-by-step and the audience appreciated her skilful work.

In the Q & A session, the attendees had several questions, most of which were addressed at the students. We had not prepared at all for questions that were not on the specific topics we presented. The students took each question in their strides, adding to each other's responses. Here are two questions and answers I have in my memory (although the words themselves may be somewhat different):

Question: Why did you choose to study digital tech in year 10?
Sarah: I am not yet sure what I want to do as an adult but I know that coding and digital skills will be important in most jobs.

Question: What do other students think about the subject (year 10 Big Ideas in Computer Technology)?
Emily: I don't think many students know what the subject is like. They think it is very hard. It's true that it is challenging, but it is also very rewarding.

As a teacher, I could not be prouder of these three girls. I just hope I will teach them again. Who knows, they might pick Algorithmics for their VCE studies.