September 12, 2020
The Math(s) Fix is Conrad Wolfram's case for teaching mathematics with the assumption that computers exist! To be clear from the beginning, Wolfram is not advocating that we solve the same problems but with a greater reliance on computers and calculators. He wants us to recognise that computers have revolutionised the discipline of mathematics and that we need to reflect this change in our curricula. 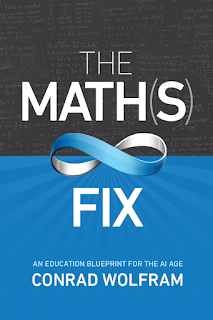 In the following lines, I will present a summary of Wolfram's thesis, as I understand it. My aim is to give you enough of an idea so you can decide whether you want to read the book for yourself. This part will concentrate on the case that the book builds for a radical change of the maths curriculum. Part 2 will explain the alternative in more detail.

Do we need a new subject?

Throughout the book, Wolfram makes the case for a "computer-based core computational subject". This would be a new, compulsory, mathematics subject. Today's curricula are stuck in the past. They emphasise computation: Long division, solving of quadratic equations and integral calculations by hand. We may use calculators to carry out these operations on occasion but the curriculum is built around these skills.
In the real world, computers carry out these, um, computations! This doesn't mean that computers have replaced mathematicians. This means that the role of a mathematician is no longer what it used to be.

Anyone for a course in photography?

Wolfram says that, until recently, a course in photography would have to include film processing. In fact, it would start with the essential skill of loading a film into the camera. Digital photography has shown us that this skill was incidental to the technology of the day, not something essential to the art itself.

Similarly, what we continue to consider as the essence of mathematics is a collection of skills that were appropriate before the advent of the digital computer.

Our author is afraid that the subject of mathematics, unless updated, will go the way of latin in British schools!

Why make it compulsory?

Wolfram takes great pain to justify the compulsory nature of mathematics. Apart from its applicability to new jobs, citizens who lack an understanding of algorithms or of the basics of data science, such as the difference between correlation and causation, will be disenfranchised in modern society.

The problem in one paragraph

The following paragraph, while perhaps a little badly written, summarises what is wrong with today's mathematics curricula. Note that I do endorse this diagnosis:

The mechanics of inverting matrices, but not the use of machine learning. Sketching graphs of functions, but not the ability to construct models from observations of the real world. Calculation of statistics by hand, but not the filtering of large datasets to extract relevant information to process (p. 119).

The process to rule them all!

Sorry, I couldn't help it. Wolfram proposes a 4-part process for computational thinking:

I will summarise my understanding of each of these 4 steps with an emphasis on the second and fourth, only because they may be the least obvious ones.

Real-world problems are open-ended in their very nature. The student needs to be trained in defining the question they want to answer precisely and to consider any constraints on their solution.

In today's maths, the student calculates the highest common factor, HCF (or greatest common divisor, GCD) of two specific integers, say 18 and 48. If we required a higher level of abstraction, the student would write an algorithm that is capable of finding the HCF of any two integers.

In this step, you actually find the answer to the question you specified in step 1. This step should be done by computer!

This is where you ask yourself a question like: "Does the answer make sense in this context?" If you teach mathematics, you may agree that this is a necessary but often neglected question. I have seen students satisfied after discounting an item by 15% and obtaining a price that is less than half of the original one!
Similarly, if you have just calculated the correlation between two variables, you may want to ask: "What does this tell me about the relationship between them?"

I do believe that Conrad Wolfram makes a good point about the need for a new maths curriculum. There is much in the first half of the book that I wish I had room to summarise here. The main point is that the book is intended as "an education blueprint for the AI age." For this reason, I hope that many maths teachers and school leaders take a look at it.
In the next instalment, I will talk more about the proposed new curriculum, what the author has termed a computer-based computational subject. I have a few disagreements with him on that part of the book, while still sharing his overarching view.
If you want a bit more detail before you commit to buying the book, you may want to visit the Computer-Based Maths website.
book review curriculum education mathematics

Anthony Stobart said…
Please correct “Stephen” to “Conrad” in your final paragraph!
6:58 am

ramblingteacher said…
Done. Thanks, Anthony.
7:20 am