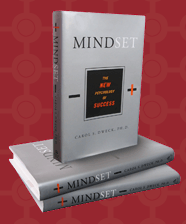 I have recently listened to the audio recording of Carol Dweck's book: Mindset (Ballantine Books, 2007).  Dweck is a professor of Psychology at Stanford University (formerly at Columbia). She had had a profound effect on me as a teacher when I was looking at research into feedback.

if you learn from person praise that success means you’re a good or able person, then you also seem to learn that failure means you are a bad or inept person. If you learn from praise that your good performance merits wholesale pride, you also learn that poor performance merits shame (Dweck, Self Theories: Their role in motivation, personality and development, 2000, Psychology Press, p. 114).

Mindset is a book written for the general public. In it, Professor Dweck distinguishes between two mindsets each of us may possess (more accurately, choose to possess): A growth mindset and a fixed mindset.

Those of the fixed mindset believe that ability is innate and unchangeable. They spend their lives trying to prove their ability. People with this mindset look at challenges as threats, since they associate effort with a lack of ability.Those with a growth mindset welcome challenges and view them as opportunities to, you guessed it, grow!

In a study at the university of Hong Kong, where instruction is in English, students found to struggle with the English language were offered a remedial course. At the same time, their mindset was tested. Those with a fixed mindset declined to take the course, perhaps fearing that it would expose their lack of ability. Students with a growth mindset opted to take the course, given that it would help them understand instruction in their chosen field.

The good news of this book is that, no matter what we start life with, we all can learn and achieve success if we put our mind to it, develop strategies and seek help from others. Dweck gives examples from the worlds of business, sport, science and education to make her point.

This notion challenges me to stop viewing my students as capable or incapable, strong or weak. Instead, I am trying  to adopt language and actions that convey the growth mindset to my students. I even told my year seven homeroom about the book and its message. Later that week, we were having trouble accessing the role marking system using the class computer. I managed to fix the problem and one of the class captains said to me: "You're so smart". The other captain rebuked her: "You shouldn't say that!" I added: "I know you meant to say you liked how I persisted until I found a way to solve the problem!" We all had a good laugh.
book review feedback growth mindset leadership